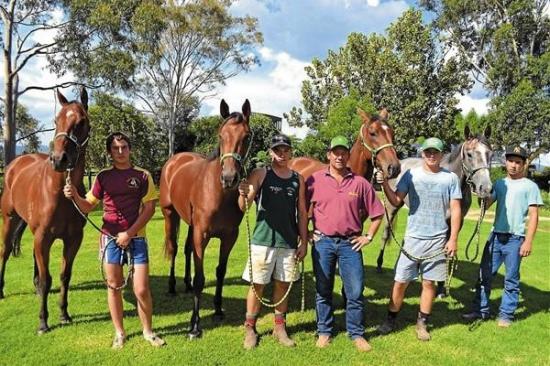 Mudgee's Brett Thompson could have made history on Tuesday by becoming the first trainer in NSW to have filled the first four placings in the one race.
The racing community was abuzz as Thompson's runners No More Honey ($12.00, David Pisani), Classical Melody ($1.80 fav, Greg Ryan), Domuar Miss ($4.80, Anthony Cavallo) and Slate On Edge ($8.50, Kody Nestor) finished first, second, third and fourth respectively.
No one in the industry could recall any trainer completing this feat in NSW before.
There has been a trainer in Queensland who has had the first four finishes in one race.
Thompson, who has been a trainer for just over three years, could not believe what he had achieved.
"I didn't realise I actually got the first four until they came back in," Thompson said.
"It sort of took a while to sink in until people on the track started saying we "think it is the first time it has happened".
"I never put a lot of thought into it at the start. I was more disappointed my good filly [Classical Melody] being beat. But it was good being beaten by her own stablemate."
In November at Wellington, Thompson got the trifecta in one race but that was in a field of five horses.
On Tuesday at Narromine in the Dubbo Equine Hospital 2yo Handicap (1100m) there were 12 runners in the race.
Thompson said his cousin and part-owner of several of his horses Carole Burns was upset.
"Carole Burns is disappointed, she owns both horses the one that run first and second but she had all her money on the one that ran second," he said.
It has been a roller coaster week for Thompson and his stable.
He had to endure every trainer's nightmare when he had to put down his champion three-year-old filly Stirring Emotion after suffering an injury during training early last week.
"I was talking to someone today about the ups and downs of racing, it can happen so quickly.
"Last week we were all gutted in the stable now we are all cheering and got things back up again.
"You can't replace what has happened, you have to keep on going on and hope you can get more success later on. Hopefully one of these [two-year-olds] end up better but I'm still disappointed to lose a nice horse."