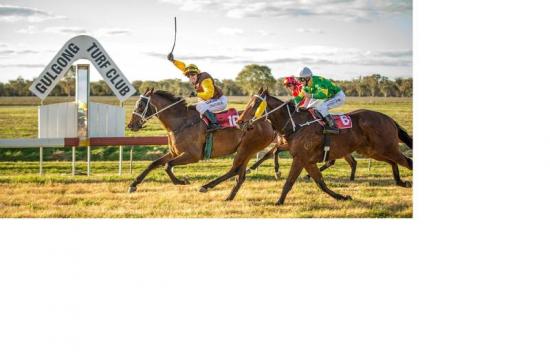 BUDGEE Boy gave trainer Brett Thompson one of his biggest thrills in racing when he scored a tough win in the $8500 Gulgong Cup (1200m) on Sunday.

Thompson has one of the largest teams of horses in bush racing and trains out of the small town near Mudgee, and while he had strength in numbers with five runners in the race, his effort to prepare the first, second and fourth placegetters was a top achievement.

Despite being a seven-year-old with a series of injuries in his past, Budgee Boy has been a model of consistency, with yesterday's win his fifth from 31 starts with 13 minor placings also thrown in.

In his current preparation, which dates back to December of last year, the gelding has finished no further back than sixth in 12 starts.

"He's been up a while this time but he's just so consistent. He's a great horse to train," Thompson said.

"I thought he was probably the outsider of my runners today but he went really well. It's a big thrill to win your home cup in a town that you've been reared in and spent your whole life in."

With stable apprentice Jake Pracey-Holmes on board, Budgee Boy ($6.00) lived up to his usual pattern and raced up on the speed and did enough to hold on and beat stablemate Sharp Note ($6.00, James Innes Jr) by half-a-length, with the early leader Prattler ($17.00, Martin Haley) a further half-length away in third position.

Another Thompson runner, Iwilldoit ($2.60 fav, Kody Nestor) ran on well from back in the field to finish fourth while the stable's other runners, Hewentwhoosh ($12.00, Leanne Henry) and Magic Poet ($10.00, Sophie Young), finished eighth and ninth respectively.

"They're all horses that we've broken in and educated, and then to get them to this point in their careers is pretty satisfying," Thompson said.

"Budgee Boy had almost two years off earlier in his career with a cracked sesamoid and cracked pelvis so to do all that work behind the scenes to get him back racing and get him to win a cup race is nice.

"He doesn't win too often but he always races well. This race was probably just as strong as a lot of TAB races around the area, that shows how well the horse is going.

"Jake had the pick of the rides in the race, and he wanted to ride Budgee Boy, so it's a big thing for his judgement to come off as well. He rode three winners today so that will do him the world of confidence as well."