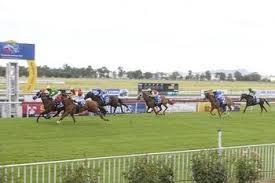 BRETT Thompson has identified the Coonabarabran Cup as the next target for Dark Mojo after the tough gelding led home a Gulgong quinella in Sunday's $40,000 Coonamble Cup (1600m).

The six-year-old provided Thompson with his biggest local win and was expertly handled by stable apprentice Jacob Gilchrist, who rode a double at Bathurst on Friday.

Dark Mojo ($11.00) held off the fast-finishing Sooner Or Later ($3.70 fav, Greg Ryan) by a nose, which added to the Mark Milton-trained gelding's frustrating run of cup placings after being runner-up in features at both Forbes and Dubbo recently.

Jake Pracey-Holmes had been riding Dark Mojo but Thompson elected to use Gilchrist's claim and the move paid off as the Trotamondo (CHI) x Mi Chiamo gelding was able to hold the lead on the fence and fend off all challengers into the home straight.

Just as Dark Mojo looked likely to clear out for an easy win Sooner Or Later emerged from the ruck and made a late lunge, while the Sue Grills-trained Couperin ($10.00, Darren Jones) ran on well to finish third.

"He found the lead easy but some of the others hunted up wide so I just niggled him a little bit to keep them away," Gilchrist told Sky Thoroughbred Central after the race.

"He travelled into the straight like a winner but he shied at the big screen and almost cost himself the win."

Thompson is down in Victoria with his stable star Slate On Edge, which runs in an all greys race at Caulfield on Wednesday, and was full of praise for both horse and rider.

"Jacob rode the horse how I asked him to. I told him to hold that spot but not bust the horse to be there," Thompson said.

"I knew he had a good sprint so I said to let him go at the 300m and it all panned out pretty well.

"He's a happy horse and racing well so we'll head to the Coonabarabran Cup now.

He came to join Thompson's stables when Paul Messara elected to cut back his numbers after taking on a bigger role with Arrowfield Stud.

"They're a great bunch of people to train for and the horse is a pleasure to train, he's a real gentleman," Thompson said.

"Young Jake (Pracey-Holmes) deserves a lot of credit too. He's been riding the horse but when I told him we were giving Jacob the ride to take the weight off his back he just said "it's about winning as a team" and copped it well.

"I feel a bit sorry for Mark Milton though. His horse is flying and just can't crack it for a win, and I almost feel bad for beating him but he's doing a terrific job with Sooner Or Later and he'll win one of these big races."