Slate On Edge strikes at headquarters 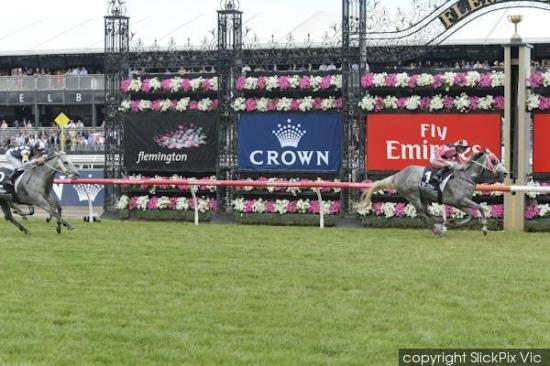 IT'S fair to say today has been a pretty good day for Brett Thompson.

The Gulgong trainer may not have been at Flemington to see his gallant grey Slate On Edge win the final heat of the Subzero Greys Challenge but he watched on with pride as his son Jay was interviewed in front of the nation.

Thompson and wife Kelley were in Sydney visiting a specialist when Slate On Edge ($9.00, Dwayne Dunn) led from start to finish on Oaks Day, backing up runner-up finishes in the Caulfield and Moonee Valley heats of the series.

The win helped the six-year-old capture the series for the second year, earning Thompson a $10,000 bonus.

"It's unbelievable," Thompson said minutes after the win.

"My wife has been a bit crook for the past few months and we are in Sydney to see a specialist but she's going to be okay.

"The boys rang me on Wednesday and said he was the best he has been since they've been down there and told us to head down but we stayed here and watched on. They will learn a lot from being there looking after him."

Last year Slate On Edge flopped in the Flemington heat of the series but the rain-affected surface was perfect for him and with Dwayne Dunn providing a ride that was described as a "master class" by Channel 7 commentator Simon Marshall, he packed too many punches for his rivals, beating Secret Toy Bizness ($5.50, James McDonald) and Harbour Grey ($3.10 fav, Ben Melham).

After being $5.00 with TAB Fixed Odds on Wednesday evening, the Zariz x Freebe gelding drifted alarmingly to start a $10.00 chance before eventually jumping at $9.00.

The move prompted Thompson's wife to pull open her wallet.

"The same thing happened at Wellington the run before we took him to Melbourne. He started $5.00 in a race at Wellington and then has gone on to run second, second and first in Melbourne.

"It would have been nice to be there because we were actually at Flemington when Subzero, who the series is named after, won the 1992 Melbourne Cup.

"But to see the boys down there getting all the attention and reward is good. Hopefully it kicks them along a bit."

While Thompson gets the glory as the trainer of the gelding, he made mention of the entire team he has working for him at Gulgong.

"My name is in the book and everyone rings and congratulates me but it's really a team thing," he said.

"The boys are down there looking after this horse, me and Kelly are in Sydney at the doctors, but we still need things to be happening back home so we keep having the success we're having.

"It's the trackwork riders, the vet, the chiropractor, and even Ray Marshall, who was our chiropractor but said he was getting too old. He looks after their teeth now.

"We've got a team in work and we do breaking in and everything as well. We're having a good trot and it's all thanks to those people, not just me.

"I've got to thank Slate On Edge's owners Greg and Debbie Hundy, and Norm Stern, as well because they are the ones that let me take the horse down to Victoria again, and I'm just glad we could give them the thrill of a winner in Cup week."